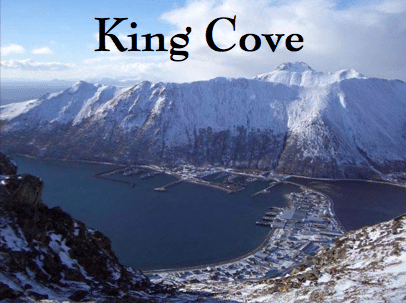 The first recorded settler at the cove was a man named Robert King, who lived there in the 1880s. In 1911, Pacific American Fisheries built a large can- nery and employed Aleut and other Native peoples, Asian workers, and Scandinavian workers. Many Native people came from the villages of Belkofski, Sanak and False Pass. The community incorporated as a first class city in 1947. Peter Pan Seafoods is the successor to PAF. The cannery has been operat- ing since 1911 (it burned in the 1970s but was im- mediately rebuilt). It is the largest salmon cannery in North America and also processes crab, bottom fish, herring, and other fish year round. A dozen traditional use hunting and trapping camps have been noted around the shores of Cold Bay and Kin- zarof Lagoon, dating from the first half of the twen- tieth century.

A sound file is embedded in this pdf document and an mp3 file is sent as an email attachment, as part of the subscription to Unangam Tunuu Word of the Week. To hear the pronunciation of the Aleut word, click on the image or open the mp3 sound file. For more information please contact Millie McKeown at milliem@apiai.org or (907) 276-2700.

Photo and text from: http://www.aleutianseast.org/