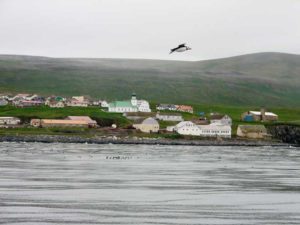 St. George is located on the northeast shore of St. George Island, the southern-most of five islands in the Pribilofs. Over 210 species of birds nest on the cliffs of St. George Island. It lies 47 miles south of St. Paul Island, 750 air miles west of Anchorage and 250 miles northwest of Unalaska. It lies at approximately 56d 36m N Latitude, 169d 32m W Longitude. (Sec. 29, T041S, R129W, Seward Meridian). Saint George is located in the Aleutian Islands Recording District. The area encompasses 34.8 sq. miles of land and 147.6 sq. miles of water.

St. George was discovered in 1786 by Gavrill Pribilof of the Russian Lebedov Lastochkin Company while looking for the famed northern fur seal breeding grounds. The island was named Sveti Georgiy, and its larger neighbor to the north was originally called St. Peter and St. Paul Island. The Russian American Company enslaved Aleut hunters from Siberia, Unalaska and Atka and relocated them to St. George and St. Paul to harvest the fur seal. Between 1870 and 1910, the U.S. Government leased the Pribilof Islands to private companies, who provided housing, food and medical care to the Aleuts in exchange for work in the fur seal plant. In 1910, the U.S. Bureau of Fisheries took control of the Islands, but poverty conditions ensued due to over-harvesting of the seals. During World War II, residents were moved to Funter Bay in Southeast Alaska as part of the areawide evacuation. Unlike other Aleutian residents, they were confined in an abandoned cannery and mine camp at Funter Bay. In 1979, the Pribilof Aleuts received $8.5 million in partial compensation for the unfair and unjust treatment they were subjected to under federal administration between 1870 and 1946. In 1983, the U.S. government ended the commercial seal harvest and withdrew from the Islands, providing $20 million to help develop and diversify the local economy – $8 million for St. George and $12 million for St. Paul. The City was incorporated in 1983. Today, residents are working to develop commercial fisheries and tourism.

St. George is predominantly Aleut, with a small Eskimo and Indian population. The Pribilof Island seal population and the community’s dependence on it has been a major influence on the local culture. More than a million fur seals congregate on the islands every summer.

A piped water and sewer system was constructed by NOAA during the 1950s. Four wells provide water for the community and the harbor, with 250,000 gallons of storage. All 60 residences are connected to the system and are plumbed. Funds have been requested to replace the failing 45-year-old water storage tank and distribution mains. Sewage outfall discharges into the harbor. The City provides refuse collection services. NOAA is completing a federal hazardous waste clean-up on the island, and will close the existing landfill.

St. George is accessible only by air and sea. There are two airstrips, one owned by the City, and a newly-constructed State-owned airport with a 5,000 foot gravel runway. Scheduled flights are provided to St. Paul and the mainland. Most freight and supplies are delivered by ship from Anchorage on a monthly or bimonthly schedule; cargo from Seattle arrives five or six times a year. There are three docks; one operated by the village corporation. An inner harbor and dock were recently completed in Zapadni Bay, 5 miles from the City.

The climate of St. George is controlled by the cold waters of the Bering Sea. The maritime location results in cool weather year round, and a narrow range of mean temperatures varying from 24 to 52. Average precipitation is 23 inches, with 57 inches of snowfall. Cloudy, foggy weather is common during summer months.