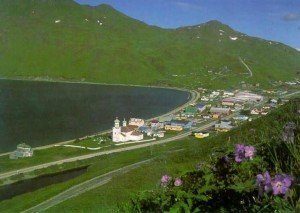 Unalaska overlooks Iliuliuk Bay and Dutch Harbor on Unalaska Island in the Aleutian Chain. It lies 800 air miles from Anchorage, a two- to three-hour flight, and 1,700 miles northwest of Seattle. The name Dutch Harbor is often applied to the portion of the City on Amaknak Island, which is connected to Unalaska Island by bridge. Dutch Harbor is actually within the boundaries of the City of Unalaska. It lies at approximately 53d 52m N Latitude, 166d 32m W Longitude. (Sec. 11, T073S, R118W, Seward Meridian). Unalaska is located in the Aleutian Islands Recording District. The area encompasses 111 sq. miles of land and 101.3 sq. miles of water.

More than 3,000 Unangan (known since the Russian era as “Aleuts”) lived in 24 settlements on Unalaska and Amaknak Islands in 1759. Unalaska became a Russian trading port for the fur seal industry in 1768. In 1787, many hunters and their families were enslaved and relocated by the Russian American Company to the Pribilof Islands to work in the fur seal harvest. In 1825, the Russian Orthodox Church of the Holy Ascension of Christ was constructed. The founding priest, Ivan Veniaminov, composed the first Aleut writing system with local assistance, and translated scripture into Aleut. Since Aleuts were not forced to give up their language or culture by the Russian Orthodox priests, the Church remained strong in the community. By this time, however, between 1830 and 1840, only 200 to 400 Aleuts lived in Unalaska. In 1880, the Methodist Church opened a school, clinic and the Jesse Lee Home for orphans. The City of Unalaska was incorporated in March 1942. On June 3, 1942, Unalaska was attacked by the Japanese. Almost all of the Aleuts on the Island were interned to Southeast Alaska for the duration of World War II. The Russian Orthodox Church was nearly destroyed by evacuating U.S. Army troops. The Church is the oldest Russian Orthodox cruciform-style church in North America, and is currently undergoing restoration.

Unalaska is a rapidly-growing and culturally-diverse community, primarily focused on fishing and fish processing activities. Subsistence activities remain important to the Unangan community and many long-term non-Native residents as well.

Unalaska’s economy is based on commercial fishing, fish processing, and fleet services such as fuel, repairs and maintenance, trade and transportation. The community enjoys a strategic position as the center of a rich fishing area, and for transshipment of cargo between Pacific Rim trading partners. The Great Circle shipping route from major west coast ports to the Pacific Rim passes within 50 miles of Unalaska, and Dutch Harbor provides a natural protection for fishing vessels. The harbor has ranked as the number one port in the nation for seafood volume and value for the past 11 years. In 1998, 597 million pounds of fish were landed in Unalaska, worth $110 million. 50 residents hold commercial fishing permits. Onshore and offshore processors provide some local employment. However, non-resident workers are usually brought in during the peak season. Westward Seafoods, Unisea and Alyeska Seafoods process seafood in Unalaska. Rapid growth occurred between 1988 and 1992 as the pollock fishery developed; the economy has now stabilized. Unalaska has a budding tourist industry and a new Convention and Visitors Bureau. During 1998, Unalaska received visitors from five cruise ships.

A new water reservoir was recently completed at Icy Creek. Water is also supplied by a dam at Pyramid Creek and Unalaska Creek, and is chlorinated and stored in a tank. The City has asked for funds to construct a 2-million-gallon back-up storage tank above Ballyhoo Road. All homes and on-shore fish processors are served by the City’s piped water system. Piped sewage receives primary treatment before discharge into Unalaska Bay. Nearly all households have plumbing; a few homes use septic tanks or privies. The City has a new lined 6-acre landfill and refuse baler; recycling and hazardous waste disposal is provided. All on-shore processors generate their own electrical power.

Daily scheduled flights serve the community at the State-owned 3,900 foot paved runway. A seaplane base is also available. The State Ferry operates bi-monthly from Kodiak between April and October. There are ten major docks in Unalaska; three are operated by the City. A refurbished World War II sub dock offers ship repair services. The International Port of Dutch Harbor serves fishing vessels and shipping, with 5,200 feet of moorage and 1,232 feet of floating dock. The small boat harbor provides 238 moorage slips. The Corps of Engineers plan to make harbor improvements and to develop a second small boat harbor in South Channel, Iliuliuk Bay, called the “Little South America.” A $9 million project to add a 500-ft. extension to the Marine Center dock will go out to bid in 2002.

January temperatures range from 25 to 35; summers range from 43 to 53. Average annual precipitation is 57.7 inches. The mean wind speed is 17 MPH.