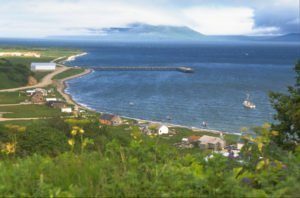 False Pass is located on the eastern shore of Unimak Island on a strait connecting the Pacific Gulf of Alaska to the Bering Sea. It is 646 air miles southwest of Anchorage. It lies at approximately 54d 51m N Latitude, 163d 24m W Longitude. (Sec. 34, T061S, R094W, Seward Meridian). False Pass is located in the Aleutian Islands Recording District. The area encompasses

The name False Pass is derived from the fact that the Bering Sea side of the strait is extremely shallow and cannot accommodate large vessels. The area was originally settled by a homesteader in the early 1900s, and grew with the establishment of a cannery in 1917. Natives immigrated from Morzhovoi, Sanak Island and Ikatan when the cannery was built. A post office was established in 1921. The cannery has operated continuously, except for 1973 – 1976, when two hard winters depleted the fish resources. The cannery was subsequently purchased by Peter Pan Seafoods. It was destroyed by fire in 1984, and was not rebuilt. The City was incorporated in 1990.

The community is primarily Unangan. Fishing, fish processing and subsistence activities are the mainstays of the lifestyle.

Water is derived from a nearby spring and reservoir, is treated and stored in a 60,000-gallon tank. Most homes are connected to the piped water system. Almost 80% of homes are fully plumbed. Many residents have individual septic tanks; wastewater from seafood processing flows directly into an outfall line. The City collects refuse twice a week. There are no recycling programs available. Water system improvements and a new landfill are needed.

Boats and aircraft provide the only means of transportation into False Pass. A state-owned 2,100 foot gravel airstrip and a seaplane base are available. Mail and passenger flights arrive three times weekly. There is no boat harbor, but new dock facilities and a boat ramp were recently completed. A boat haul-out and storage facility are under construction. Protected moorage is needed; the Borough has proposed a $13 million small boat harbor, which may begin construction in 2003. The Corps of Engineers are designing the facility. Cargo barges are available from Seattle. No local taxi or delivery services exist in False Pass. The State Ferry operates bi-monthly from Kodiak between May and October. 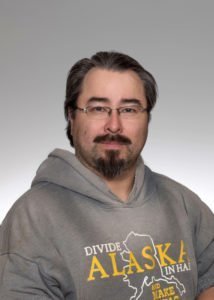