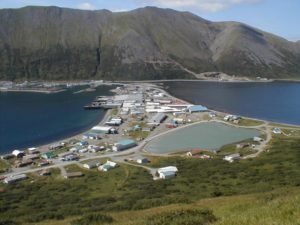 King Cove is located on the south side of the Alaska Peninsula, on a sand spit fronting Deer Passage and Deer Island. It is 18 miles southeast of Cold Bay and 625 miles southwest of Anchorage. It lies at approximately 55d 03m N Latitude, 162d 19m W Longitude. (Sec. 22, T059S, R086W, Seward Meridian). King Cove is located in the Aleutian Islands Recording District. The area encompasses 25.3 sq. miles of land and 4.5 sq. miles of water.

King Cove was founded in 1911 when Pacific American Fisheries built a salmon cannery. Early settlers were Scandinavian, European and Unangan fishermen. Of the first ten founding families, five consisted of a European father and an Aleut mother. The City was incorporated in 1949. The cannery operated continuously between 1911and 1976, when it was partially destroyed by fire. The adoption of the 200-mile fisheries limit spurred rebuilding. King Cove remains tied to fishing and fish processing.

Scandinavians have historically influenced the cultural, economic and social structures. King Cove is a mixed non-Native and Unangan community.

King Cove’s economy depends almost completely on the year-round commercial fishing and seafood processing industries. The Peter Pan facility is one of the largest cannery operations under one roof in Alaska. Up to 500 non-residents are brought up to work in the cannery as needed. 62 residents hold commercial fishing permits. In 2000, the estimated gross fishing earnings of residents exceeded $6.2 million. Income is supplemented by subsistence activities. Salmon, caribou, geese and ptarmigan provide food sources.

Water is supplied by Ram Creek with a sheetpile dam which stores about 980,000 gallons of unfiltered water. A $9 million project to develop a new supply is nearing completion – a well field at Delta Creek and storage tank. All residents are connected to the piped water system. A piped sewage collection system connects all homes and facilities to central septic tanks. Two lift stations and tanks provide primary (20,000 gallons) and secondary treatment (84,000 gallons) of waste, with discharge through an outfall line. All homes are fully plumbed. The City collects garbage twice a week. Aluminum is recycled. The landfill is nearing capacity. A hydroelectric power project has recently been completed at Delta Creek. Peter Pan operates its own electric system.

King Cove is accessible only by air and sea. A State-owned 3,360 foot gravel runway is available. Gale force crosswinds are common, as the airport lies in a valley between two volcanic peaks. A local priority is to construct a 27-mile road to Cold Bay, through the Izembek National Wildlife Refuge, to access their airport. The $14 million road has drawn state and national controversy. The State Ferry operates bi-monthly between May and October. The ferry and marine cargo services use one of three docks owned by Peter Pan Seafoods. A deep water dock is also operated by the City. The North Harbor provides moorage for 90 boats, and is ice-free all year. A new harbor and breakwater is under construction by the Corps of Engineers and Aleutians East Borough. Upon completion, the new Babe Newman Harbor will be operated by the City, and will provide additional moorage for 60′ to 150′ fishing vessels.

King Cove lies in the maritime climate zone. Temperatures average 25 to 55, with extremes from -9 to 76. Snowfall averages 52 inches, and total annual precipitation is 33 inches. Fog during summer, and high winds during winter, can limit accessibility.