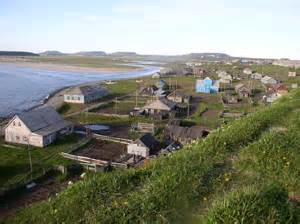 Nikolski is located on Nikolski Bay, off the southwest end of Umnak Island, one of the Fox Islands. It lies 116 air miles west of Unalaska, and 900 air miles from Anchorage. It lies at approximately 52d 56m N Latitude, 168d 51m W Longitude. (Sec. 04, T084S, R136W, Seward Meridian). Nikolski is located in the Aleutian Islands Recording District. The area encompasses 132.1 sq. miles of land and .7 sq. miles of water.

Nikolski is reputed by some to be the oldest continuously-occupied community in the world. Archaeological evidence from Ananiuliak Island, on the north side of Nikolski Bay, dates as far back as 8,500 years ago. The Chaluka archaeological site, in the village of Nikolski, indicates 4,000 years of virtually continuous occupation. People were living in Nikolski before the Pyramids were built, the Mayan calendar was invented, or the Chinese language was written. In 1834, it was the site of sea otter hunting, and was recorded by the Russians as “Recheshnoe,” which means “river.” In 1920, a boom in fox farming occurred here. The Unangan became affluent enough to purchase a relatively large boat, the “Umnak Native,” which was wrecked in 1933. A sheep ranch was established in 1926 as part of the Aleutian Livestock Company. In June 1942, when the Japanese attacked Unalaska and seized Attu and Kiska, residents were evacuated to the Ketchikan area. Locals were allowed to return in 1944, but the exposure to the outside world brought about many changes in the traditional lifestyle and community attitudes. In the 1950s, the Air Force constructed a White Alice radar communication site here, which provided some jobs. It was abandoned in late 1977.

Residents are known as Unangan, and Aleut is spoken in three-quarters of all homes. Subsistence activities, sheep and cattle raising, and fishing-related employment sustain the community.

Most residents support themselves by working outside the village at crab canneries and on processing ships. The lack of a harbor and dock have limited fisheries-related activities. The village is interested in developing a small value-added fish processing plant and a sport fishing lodge to attract former residents who left Nikolski for economic reasons. A sport-fishing charter boat was recently purchased by APICDA. 4,000 to 7,000 sheep, as well as 300 head of cattle and 30 horses graze over much of the island. Income is supplemented by subsistence activities, which provide a substantial part of the villagers’ diets. Salmon, halibut, seals and ducks are utilized.

The twelve occupied homes in Nikolski are connected to a piped water system and individual septic tanks. All homes are fully plumbed. The Council provides septic pumping services. The village has requested funds to develop a treated water supply.

Nikolski has a 3,500 foot unlighted gravel runway which provides passenger, mail and cargo service. The airstrip is owned by the U.S. Air Force. It has no landing or port facilities for ships. Barges deliver cargo once or twice a year. Goods and passengers are lightered three miles to the beach.

Nikolski lies in the maritime climate zone. Temperatures range from 11 to 65. Snowfall averages 41 inches; total precipitation is 21 inches. Strong winds are frequent during the winter, and fog during the summer, which limits accessibility. 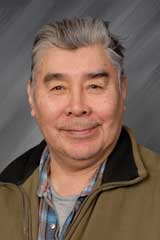