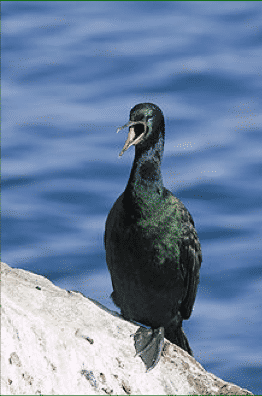 Sound file narrated by George McGlashan who was from Akutan, AK

The Pelagic Cormorant (Phalacrocorax pelagicus), also known as Baird’s Cormo- rant, is a small member of the cormorant family Phalacrocoracidae. Analogous to other smallish cormorants, it is also called Pelagic Shag occasionally. This seabird lives along the coasts of the northern Pacific; during winter it can also be found in the open ocean.[1]…

This numerous and widespread species is not considered threatened by the IUCN. The bulk of its population is found in the relatively inaccessible waters of the Bering Sea region; about 50,000 each breed in the Kuril Islands, the Bering Sea islands, and the U.S. state of Alaska and its offshore islands (including the Aleuts).