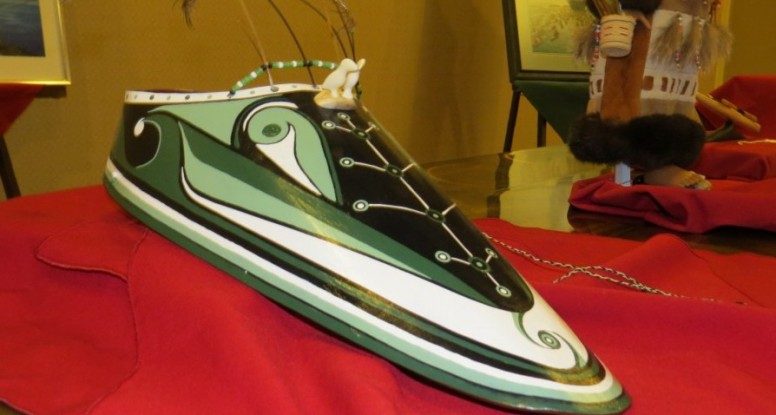 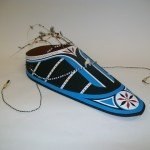 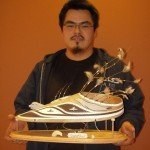 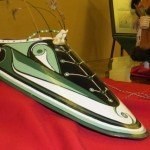 An uprising artist, Tim Shangin began his art work after attending the Aleutian Pribilof Islands Association’s 1st Urban Unangax^ Culture Camp in 2008.  Although Tim is Alutiiq, he fell in love with Aleut Art after he met his wife, Josephine Borenin-Shangin, an Unangax^ from Akutan, Alaska.

Tim focuses on learning the designs and patterns used on traditional Aleutian visors. Only seven visors of this rare form were collected by explorers during the late 1700’s to the mid 1800’s which are held in museums throughout the world.

The stunning long visor or open-crowned hat that Tim is holding in the photograph above, is the very first visor he made. He began making the visor at APIA’s 2008 Urban Unangax^ Camp under the direction of O. Patricia Lekanoff-Gregory and finished it on his own when he returned home to Akutan. The visor is hand carved and features elaborately painted traditional geometric patterns and designs. The traditional design is hand painted with acrylic paint and decorated with glass beads, sea lion whiskers, with duck feathers and a fossilized ivory figurine, carved by Tim himself, adorning the hat.

Tim continues to make bentwood visors and is perfecting his craftsmanship,  you can see in the photographs shown here. He donates visors to APIA’s Gala fundraiser and they are highly prized at the live auctions. In 2013, one of Tim’s visors went for $3,500!

To inquire about the availability of Tim’s work, please contact him at PO Box 146, Akutan, AK 99553 or email him at shangint@hotmail.com.